Can Do Musos was established to promote and support challenged musicians from all over the world.

"Muso" or "musos" are terms used widely in parts of the world to describe a musician or group of musicians with passion and dedication to their music. 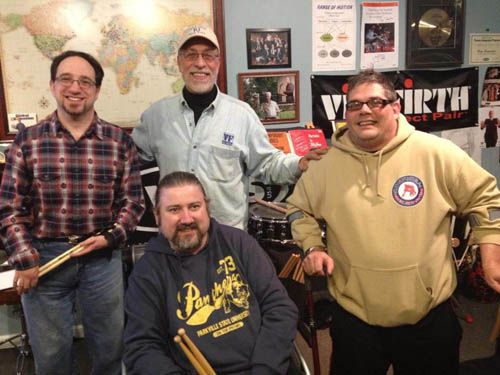 Can-Do Musos was established by Andrew Hewitt, Dom Famularo, David Segal and Michael Mignogna to give musicians with "challenges" a voice where they would normally not be heard. As our Mission Statement says Can Do Musos want to provide guidance and hope to all musicians with challenges. Music is empowering and has no limitations and everyone should have a chance at their dreams.

Having a "Can Do attitude" is the first step toward success!

On our website, we use the word "challenges". We feel that disability quite often gets misinterpreted as an inability. People with challenges have passion, can be empowered and want to succeed.

In 2014 we added drummer Joe Hardy to our board of directors.

In November 2014, Andrew Hewitt started hosting Can-Do Radio, which is a weekly online radio show which features music from Can-Do Musos. Current podcasts of the show can be found at podomatic.com.

On the 24th January 2015, we presented Can-Do Musos - Bringing the Disabled Musician into the Mainstream a panel discussion in the H.O.T. Zone at The NAMM Show in Anaheim, California.

In December 2015, Andrew Hewitt began hosting and producing CAN-DO MUSOS TV - an online TV show showcasing Can-Do Musos from all over the world via vimeo.com.

In 2017, Can-Do Musos perfomed on Center Stage at NAMM. This performance involved 12 musicians from 4 countries.

In 2019, Can-Do Musos perfomed on the Arena Plaza Stage at NAMM.

We are always looking for passionate musicians with challenges to profile on our website and be a part of this unique new organisation.

People can sign up via our website www.candomusos.com. Whether you sing, play guitar, keyboards, drums, even souzaphone, we would love to hear from you. Please remember to give us as much information as possible.